Living in the light of infinitude

I yearn towards some philosophic Song
Of Truth that cherishes our daily life
With meditations passionate from deep
Recesses in man's heart....

William Wordsworth (1770-1850) was a romantic poet whose verses sound a great hymn to nature. So much for the cliché. Indeed, in poems like his Daffodils, with the golden flowers 'fluttering and dancing in the breeze', he shows himself a brilliant painter of natural scenes. But Wordsworth is much more than the author of exquisite natural lyric. With his poetry, he attempted to expose reality in its essence, to show the coherence of the phenomenal world, and to indicate man's place in nature. In doing so, he had an eye not only for natural idyll, but also for the ruthless and fearful manifestations of nature.

As he himself said, 'Nature, Man and Society' was Wordsworth's great subject. Or, as he elsewhere stated:

On Man, on Nature, and on Human Life,
Musing in solitude, I oft perceive
Fair trains of imagery before me rise (...)

The Prelude is Wordsworth's magnum opus. The poem spans fourteen 'books', almost nine thousand lines in all. This length provided the scope required to investigate the foundations of his poetic worldview and the development of his ideas over time. The subtitle The Growth of a Poet's Mind is therefore apt. Childhood recollections are  central to the work: memories that impressed him deeply, shaped his personality and formed the basis of his subsequent poetry. They made him see the ordinary and everyday in the light of the eternal and infinite. Wordsworth's poetry certainly has a philosophic flavour. Philosophy, however, is the undercurrent, embedded in exquisite language, as a shimmering surface of a lake shelters the deep motions beneath. Wordsworth is poet first, philosopher second. He does not express his vision of reality through logical discourse, but through 'fair trains of imagery'. Indeed, these images are mostly taken from nature and landscape, especially the English Lake District.

Long summer days
One of the earliest recollections that Wordsworth illuminates, concerns a scene in the backyard of his childhood home. His garden bordered the river Derwent, 'a Playmate whom we dearly loved'. This river enjoyed, as he writes:

To blend his murmurs with my Nurse's song,
And from his alder shades and rocky falls,
And from his fords and shallows, sent a voice
That flowed along my dreams.

Wordsworth played at the Derwent for long summer days as a toddler. He ran over field, crag and hill, with Mount Skiddow in perpetual view:

Oh! many a time have I, a five years' Child,
A naked Boy, in one delightful Rill,
A little Mill-race severed from his stream,
Made one long bathing of a summer's day,
Basked in the sun, and plunged, and basked again
Alternate all a summer's day, or coursed
Over the sandy fields, leaping through groves
Of yellow grunsel, or when crag and hill,
The woods, and distant Skiddaw's lofty height,
Were bronzed with a deep radiance, stood alone
Beneath the sky, as if I had been born
On Indian Plains, and from my Mother's hut
Had run abroad in wantonness, to sport,
A naked Savage, in the thunder shower.

How evocative of our own childhood! The intensity of the original experience forever etches them in our memory. These are the places in time that continue to glow in the dark forest of forgotten events. But with Wordsworth, the summery child's play by the river takes on the dimension of a universal, almost religious experience; of a baptism in water and radiant sunlight, in the security of an all-encompassing nature. This is quite a stretch for those unfamiliar with the context of Wordsworth's craft. The following offers some pointers to his approach.

Spots of time
Wordsworth called the key moments from his childhood spots of time. There are about twenty in The Prelude, among them the story of his roving as a boy in high places to plunder ravens' nests.

Nor less in springtime when on southern banks
The shining sun had from his knot of leaves
Decoyed the primrose flower, and when the Vales
And woods were warm, was I a plunderer then
In the high places, on the lonesome peaks
Wherever, among the mountains and the winds,
The Mother Bird had built her lodge. Though mean
My object, and inglorious, yet the end
Was not ignoble. Oh! when I have hung
Above the raven's nest, by knots of grass
And half-inch fissures in the slippery rock
But ill sustained, and almost, as it seemed,
Suspended by the blast which blew amain,
Shouldering the naked crag; Oh! at that time,
While on the perilous ridge I hung alone,
With what strange utterance did the loud dry wind
Blow through my ears! the sky seemed not a sky
Of earth, and with what motion moved the clouds!

What strikes us, is that Wordsworth underwent most of these experiences alone. Beside the Derwent he was 'alone under heaven'. From the narrow ledge, reaching for the eggs in the raven's nest, 'I hung alone,' he writes. 'I was alone' can also be read in the story of his nightly raids among the cliffs, when he, nine years old, was after woodcocks, his 'shoulder all with springes hung'.

'Twas at an early age, ere I had seen
Nine summers, when upon the mountain slope
The frost, and breath of frosty wind had snapped
The last autumnal crocus, 'twas my joy
To wander half the night among the Cliffs
And the smooth Hollows where the woodcocks ran
Along the open turf. In thought and wish
That time, my shoulder all with springes hung,
I was a fell destroyer. On the heights
Scudding away from snare to snare, I plied
My anxious visitation, hurrying on,
Still hurrying, hurrying onward; moon and stars
Were shining over my head; I was alone,
And seemed to be a trouble to the peace
That was among them.

Even during adventures with friends, the boy Wordsworth experienced the moment when he felt swallowed by the natural environment, in solitude. In winter, he often went skating on the lake after nightfall. He and his friends 'all shod with steel'played games 'imitative of the chase and woodland pleasures – the resounding horn, the pack loud bellowing, and the hunted hare'. But then, after a while, he left 'the tumultuous throng', retired into a silent bay and glided 'across the reflex of a star'that 'gleamed upon the glassy plain'. Then he stopped short and 'stood and watched till all was tranquil as a dreamless sleep'.

Out early
Young Wordsworth used to go out early in the morning before school started to roam the  hills, often in the company of his best friend.

My morning walks
Were early: oft, before the hours of school
I travelled round our little lake, five miles
Of pleasant wandering. Happy time! more dear
For this, that one was by my side, a friend
Then passionately loved.

But Wordsworth also made his morning circle of the lake on his own, and even earlier – at sunrise.

Nor seldom did I lift our cottage latch
Far earlier and before the vernal thrush
Was audible, among the hills I sate
Alone upon some jutting eminence
At the first hour of morning, when the vale
Lay quiet in an utter solitude.

At such moments, the outside world seemed merged with inner reality; the landscape he envisioned blended with the prospect that he thought or dreamed.

Oft in these moments such a holy calm
Did overspread my soul that I forgot
That I had bodily eyes, and what I saw
Appeared like something in myself, a dream,
A prospect in my mind.

Wordsworth does not dare to explain exactly how the wide, still landscape affected him. It would take too many words, even if he could find them. But he does indicate what he thought all those impressions brought about.

Twere long to tell
What spring and autumn, what the winter snows,
and what the summer shade, what day and night,
The evening and the morning, what my dreams
And what my waking thoughts, supplied to nurse
That spirit of religious love in which
I walked with Nature.

So Wordsworth not only walked in nature, he also walked with nature. When young, he says, he felt with nature an intimate religious association.  ►

Our destiny, our being's heart and home,

Is with infinitude, and only there. 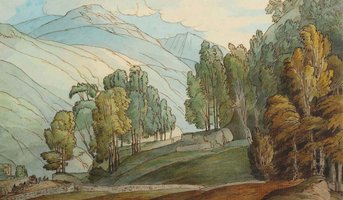